How important is SAR value ?

In modern society people are frequently exposed to different types of radiations and this exposure comes from different sources. It could be related to everyday life (televisions, mobile phones, computer devices, occupational equipment). SAR is a measure of the rate at which energy is absorbed per unit mass by a human body when exposed to a radio frequency. FCC approval means that the device should never exceed the maximum levels of consumer RF exposure permitted by federal guidelines. The National Frequencies Agency (ANFR) publishes an interim report of DAS (Specific Absorption Rate) checks carried out on 46 mobile phones in 2021. There are Mobile phones available in France and India but don’t comply with the relevant standards.

India has adopted one of the most stringent electromagnetic field (emf) exposure norms in the world. Unlike previous technologies, the current 5G in the 3.5 GHz band requires the phone to use two networks simultaneously, the 4G network and the 5G network. Measures have been taken by the department of telecommunications, Government of India to keep a regulatory check on the exposure. Exposure to very high RF intensities can result in heating of biological tissue and an increase in body temperature.

Specific absorption rate (SAR) is a measure of the rate at which energy is absorbed per unit mass by a human body when exposed to a radio frequency (RF). It is defined as the power absorbed per mass of tissue and has units of watts per kilogram (W/kg).

The FCC requires the cell phone manufacturers to conduct their SAR testing to include the most severe, worst-case (and highest power) operating conditions for all the frequency bands used in the USA for that cell phone. The SAR values recorded on the FCC’s authorization and in the cell phone manual to demonstrate compliance with Commission rules indicate only the highest single measurement taken for each frequency range that the particular model uses.

How to Check the Radiation Level (SAR) of Your Phone? 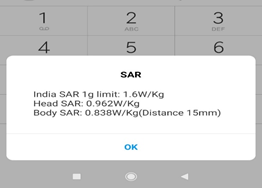 What SAR Does Not Show?

The SAR value used for FCC approval does not account for the multitude of measurements taken during the testing. Moreover, cell phones constantly vary their power to operate at the minimum power necessary for communications; operation at maximum power occurs infrequently.

Consequently, cell phones cannot be reliably compared for their overall exposure characteristics on the basis of a single SAR value for several reasons

What is FCC approval?

FCC approval means that the device will never exceed the maximum levels of consumer RF exposure permitted by federal guidelines, but it does not indicate the amount of RF exposure consumers experience during normal use of the device. While only the maximum SAR values are used for FCC approval, all test reports submitted by the manufacturer are available in full for public inspection on the Commission’s website. 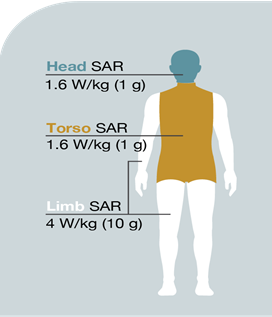 Unlike previous technologies, the current 5G in the 3.5 GHz band requires the phone to use two networks simultaneously, the 4G network and the 5G network. This linked mode of operation, known as “Non-Standalone (NSA)”, could be analysed in the new SAR measurement laboratory of the ANFR.

The first checks carried out as part of the market surveillance show that the additional contribution of 5G is very low and only appears when the 4G and 5G antennas in the phone are co-located. Average increase of 0.4% for trunk SAR and 1.8% for limb SAR were thus observed.

Concerning the two non-compliant terminals, the list of which and the details of the measures are recalled in the appendix, the highest levels of “trunk SAR” and “member SAR” were 2.86 W/Kg and 5.26 W/Kg. These phones have been the subject of a software update to reduce the power of the phone and thus lower the level of SAR below the thresholds of 2 and 4 W/Kg.

The National Frequencies Agency (ANFR) publishes an interim report of DAS (Specific Absorption Rate) checks carried out on 46 mobile phones collected from points of sale in France since the start of 2021.

Among these, 13 5G phones have been checked and appeared to comply with the regulations. Of the 46 telephones sampled, two of them exceeded the regulatory limit and were already the subject of a communication during the implementation of software updates by their manufacturers.

As part of its mission to control public exposure to electromagnetic waves and market surveillance, the ANFR publishes the results of the SAR measurements it performs on mobile phones marketed in France to ensure their compliance with European regulations. The DAS makes it possible to quantify the energy transported by electromagnetic waves and absorbed by the human body. This publication contributes to public information on exposure due to mobile phones.

As requested by Cédric O, Secretary of State in charge of the Digital Transition of Electronic Communications, the ANFR is strengthening its controls in 2021, with 140 terminals planned in the long term, including 5G smartphones.

Since the start of the year, the ANFR has collected 99 models of telephones sold in France, representing more than 77% of telephone sales in France. 46 telephones have already been the subject of SAR measurements (trunk and limb), 44 of them have been measured with a SAR in accordance with the regulations, that is say less than 2 W/Kg for the SAR trunk and 4 W/Kg for the DAS member.

The other two phones were measured at levels exceeding these values.

Regarding the 44 compliant terminals:

List of mobile phones with a non-compliant “trunk” SAR

List of Mobile phones with a non-compliant “member” SAR

India has adopted one of the most stringent Electro Magnetic Field (EMF) exposure norms in the world. The measures taken by the Department of Telecommunications, Government of India, are:

1) SAR WHAT IT MEANS TO YOU – FEDERAL COMMUNICATION COMMISION

admin2022-03-30T10:17:59+00:00
Page load link
We use cookies on our website to give you the most relevant experience by remembering your preferences and repeat visits. By clicking “Accept All”, you consent to the use of ALL the cookies. However, you may visit "Cookie Settings" to provide a controlled consent.
Cookie SettingsAccept All
Manage consent